Did You Know that the Frozen Margarita Was Invented by an American? 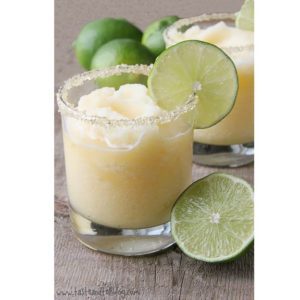 There are a quite a few people claiming to have invented the frozen margarita, but according to an article on thenibble.com, the prevailing credit goes to a wealthy Dallas socialite named Margaret Sames, who apparently created the cocktail during the Christmas holidays in 1948. She and her husband, Bill, invited some friends over, and Margaret wanted to make a refreshing cocktail for them to enjoy next to the pool before lunch.

She said: “After all, a person can only drink so many Screwdrivers, Bloody Marys or beers. I want to make a new drink.”

She experimented with different combinations of Cointreau and tequila, but they were either too sour or too sweet. Finally, she developed a recipe she was happy with. She added lime juice to stabilize the alcohol, and for a final touch of pizzazz, she put a light dusting of salt on the glass rim – which today is still the distinctive characteristic of a frozen margarita.

Over the years, the couple continued serving the drink to their friends, calling it ‘Margarita’s Drink’ or ‘The Drink’. Then, one day Bill gave Margaret a set of champagne glasses with the name ‘Margarita’ etched on them. Hence, it’s final name – The Margarita.

The recipe was spread by the couple’s guests and friends, one of whom was the owner of the Hotel Bel-Air – a popular spot with movie stars John Wayne and Lana Turner, as well as other celebrities who all became fans of this new cocktail. The rest is history – the frozen margarita rapidly began being served in other hotels, bars and restaurants all over America and the world.