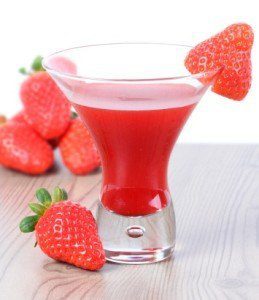 The name of the world-renowned and delicious strawberry daiquiri is said to come from a beach and iron mine in Santiago, Cuba. Legend has it that the manager of the Spanish American Iron Company, Jennings Fox, invented it in 1905 at his home while entertaining friends.

Apparently he wanted to serve a gin-based drink but was out of gin. On a whim, he whipped up some Bacardi rum, sugar, strawberries and lime. It’s not known if his original cocktail contained ice, considering the hot climate and the lack of technology of the time, but his daiquiris wowed his friends and, as a result, local pubs and bars began serving them.

When technology enabled it, the strawberry daiquiri was served with cracked ice. Bartenders added ice to tall glasses, pouring a teaspoon of granulated sugar over the ice, followed by lemon or lime juice, then strawberry schnapps and Bacardi rum. If Bacardi wasn’t available, white rum was used or, very rarely, vodka.

Regarding the amount of alcohol per cocktail, generally at least 2 or 3 ounces were used, which obviously gave the original strawberry daiquiri quite a strong kick. Over time, the preparation evolved; the cocktail would be mixed in a shaker, and shaved ice was used instead of cracked ice. The glasses were frosted in a freezer and served cold – as they are today.

There has been some research and speculation as to whether the daiquiri was in fact created before Jennings Cox invented his version, with a few historians claiming that there is evidence it might be connected to British sailors in the 18th Century. But who really cares? It’s here to stay!

Move Over Chocolates and Roses-- Strawberry Daiquiris are Here to Save Vale...
Freak Out Party Goers This Halloween By Adding Some Creepy to Your Strawber...
The Perfect Party Drink for Every Guest: A Strawberry Daiquiri Mixed in a M...