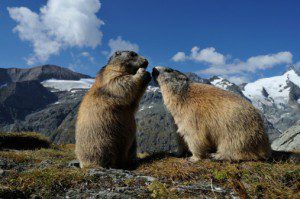 Groundhog Day: a funny movie, a terrible holiday. Really, who decided to give some crazy groundhog the rights to decide if winter would stick around another six weeks or if spring was coming? And does Mr. Punxsutawney Phil ever NOT see his shadow? It seems like year after year, he scurries his little behind back in to his burrow and dooms the rest of us to six more weeks of ice melt and window scrapers. We’re pretty sure it’s Mrs. Punxsutawney’s fault. Now, we hate to blame the Mrs.; we know it sounds really lame to call her the culprit. But as we see it, the conversation probably goes something like this in the burrow.

Mr. P: “I just don’t want to go out there again. It’s so cold, and everyone keeps looking at me with these expectant glares.”

Mrs. P: “C’mon, Phil. It’s not that bad. Just go out quickly, and then hurry back in here to me and this nice warm fire.”

Mrs. P: “You have to, sweetheart. But go and I’ll have a nice warm cup of coffee here waiting for your return. I’ll turn on the electric blanket, put your slippers by the fire and be ready to give you a back rub when you get back.”

Seriously, if Mrs. P switched up her tactics a little, her rodent of a husband might actually go out long enough to see if he really has a shadow or not. We assume Phil has never had a Blender Boyz iced cappuccino. His wife has probably never thought of giving him a cold drink on a cold day. He’s just too comfy in that burrow. If he had an iced cappuccino before he left, he’d remember how refreshing it is on a hot day, he’d join our side, and his shadow wouldn’t be seen anywhere.

And Mrs. P., get this, they are SO easy to make! Just open up a Blender Boyz packet and throw it a blender with some ice. Voila! The world thanks you. In fact, the world joins you! Everyone get your Blender Boyz iced cappuccino packets today, and we’ll drink together with the marmots. (Please, if anyone knows the Punxsutawneys’ address, we’d love to send them a few packets.)