Where in the World Did that Delicious Piña Colada Come From? 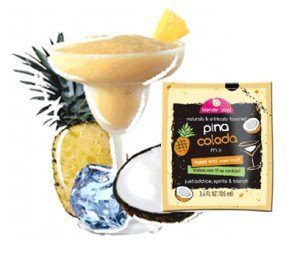 Of all the weird and wonderful cocktails and frozen beverages out there, the piña colada is probably the most famous rum-based drink. Whether you’re sitting on a sun-drenched stretch of an exotic beach or relaxing in your backyard, it goes down perfectly!

We’re not entirely certain who invented this tropical concoction, but whoever did, thumbs up to them! Like many iconic drinks, the history of the piña colada is disputed. However, what we do know is that, since 1978, it has been the official beverage in Puerto Rico.

The name piña colada literally means ‘strained pineapple’ in Spanish. It’s a sweet cocktail make with coconut cream, pineapple juice and hard rum, usually served either shaken or blended with ice, and often garnished with a maraschino cherry or a pineapple wedge.

There are many stories about the origins of the piña colada. The oldest one dates back to the 1800s. Apparently a Puerto Rican pirate gave his crew a cocktail or beverage containing white rum, pineapple and coconut to boost their morale. The drink would later be known as the piña colada. Unfortunately, the recipe was conveniently lost when he died in 1852.

The story that is perhaps the most believable is that on August 15, 1954, the drink was first served in San Juan, Puerto Rico, at the Caribe Hilton’s Beachcomber Bar by Ramon Marrero. Supposedly, hotel management had requested him to create a new signature drink to delight the palates of the hotel’s demanding clientele. Marrero accepted the challenge and after 3 months of intense experimenting, shaking and blending, the first piña colada, as we know it today, was born.